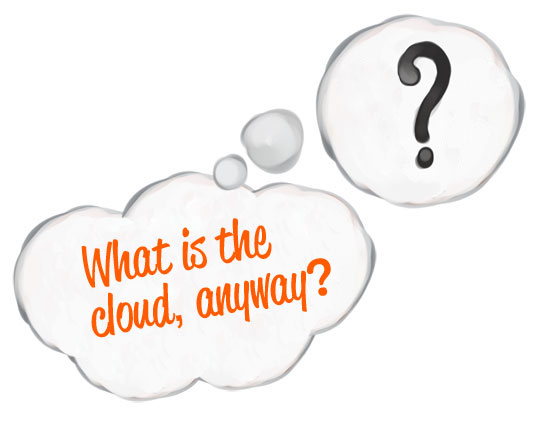 It’s impossible to read a tech trade magazine or watch more than an hour of TV programming without reading/hearing some reference to “the cloud.” We all know what it is, right? Right? It means information is stored in different clouds and it just gets sent back and forth through the air? Well it’s a little bit more complex than that.

So What is the Cloud?

Cloud computing fundamentally means harnessing the power of many machines to store and manage information, instead of the restricted power of just one machine. It’s many servers and routers that sit in a warehouse and store and transmit information all over the world, so people can access their data through the internet. The connection through the internet is key, as some writers position cloud computing as a “metaphor for the internet,” meaning the two are one and the same and interconnected.

The cloud is a term and idea that has been around for a while now. If you polled most people, they might say it started around 2003 or 2004, but engineers at Compaq Computer (remember them?) have documents containing the phrase back in 1996. While this was the first usage, Google’s Erich Schmidt brought it to the forefront in a speech in 2006. And of course Google’s entire model is a cloud-based business. When you access Maps on your phone or pull a Google Doc, this action is accessing data or files from the Google Cloud. Microsoft is another big cloud player, with its Internet-accessible Office 365 and the Azure cloud platform that enables enterprises to develop and deploy applications.

With cloud based systems, a worker accesses files or processes through their phone, tablet, or computer, but none of the software or files reside on the actual device. Despite files and software not being located on your personal device, there is still a considerable amount of physical infrastructure required for cloud computing. It isn’t simply signals going through the ether, all of that data still resides on servers somewhere. The difference is it’s located elsewhere so you don’t need to buy any physical storage.

For the enterprise, moving to cloud systems offers compounded benefits due to the advantage of a group of people gaining access to the same information. It gives mobile employees the freedom to work on the go and edit content simultaneously, whether they’re in Bangor, Maine or Bangalore, India.

With any technological advance there are caveats, and cloud technology has a few. One of them is the issue of control. When moving to cloud based systems, individuals and enterprises give up some control over the content and data to thier cloud service provider (whether it’s storage or a cloud-based CRM solution). While this does carry some risks, there are always risks holding information “on premises” as well. Hard drives can be lost/stolen/broken, server rooms can be flooded or overheated, etc. Having “control” isn’t quite as bulletproof as it may seem, and cloud providers have redundancies and safeguards to protect information.

The future holds even more promise for consumers and business users, one where devices will basically function as terminals, not storage devices. Files and other data will be kept largely within the cloud, due to convenience, low costs, and ease of use. Businesses are already moving information and tasks to cloud systems which allows them to expand quickly, reduce costs, and eliminate geographic barriers.

It’s like Running a Business by Christopher de Zeeuw